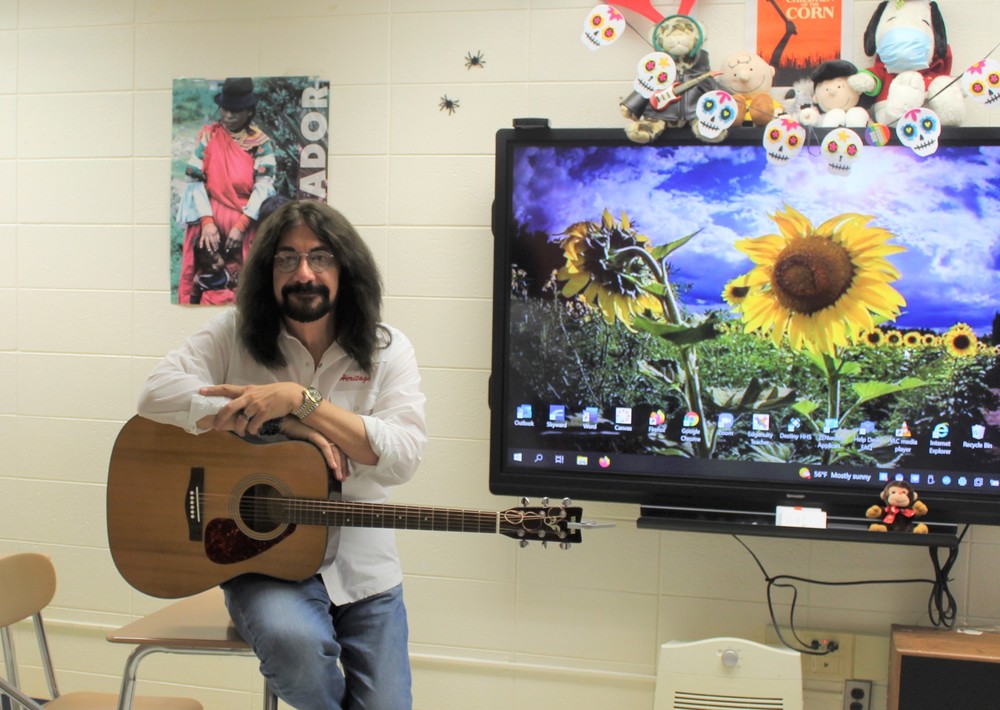 Heritage journalism student, sophomore, Jordan Nes-Iadicola, sat down with Mr. David Alexander, as he enters the home stretch of his 16 year teaching career at Heritage.

Long time Heritage Spanish teacher, Mr. David Alexander has decided to retire at the end of this 2022-2023 school year. After working at Marvel Comics in the 1990’s and then owning a book shop, Alexander first “retired” in the early 2000’s when he was 50 years old, but he got bored of the retired life after about six months and decided to get certified to teach.

He ended up choosing Heritage because he was offered to teach both Spanish and English, and he wanted the challenge. Born and raised in Chicago, Mr. A. lived an interesting life leading up to teaching, including playing music in various bands. He ran the Music Club for many years at Heritage, leading various students in putting on professional quality performances. Music will be heavily involved in his post-teaching life, and the goal of this interview was to get Mr. A.’s thoughts on various topics relating to his last year teaching at Heritage and to know more about his musical interests.

Jordon - “What have you enjoyed most about your teaching career?”

Mr. A - “This is actually very easy to answer. One of the things I found out very quickly was that students have a really good sense of humor. So for 16 years, they have made me laugh. It’s just an enjoyable thing when you have students who are awake and aware. It's just really entertaining for me to get feedback from them; it’s really enjoyable.” 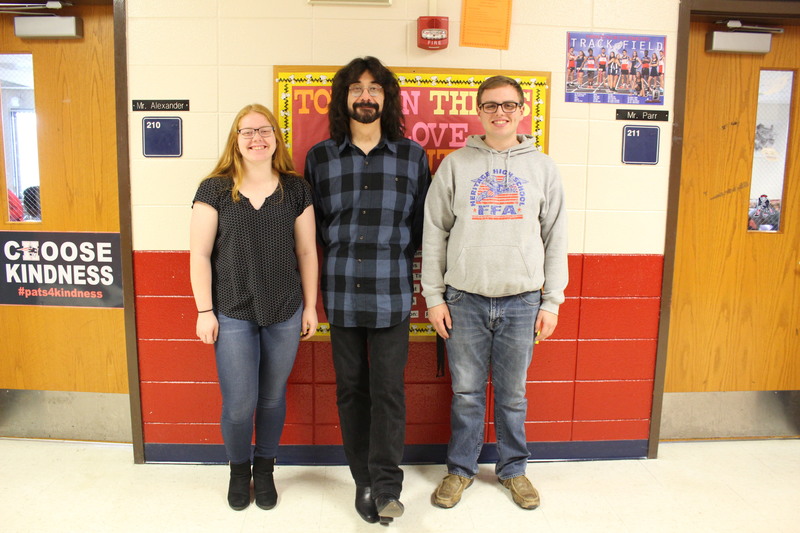 Not just a musician, Alexander has been a beloved teacher, here posing with 2019 senior "Teacher's Pets," Nicole Meyer and Noah Berning.

Jordon - “What do you look forward to most in your last year of teaching?”

Mr. A - “I have Spanish One this year, which I haven’t had for about five years, and I have a group of 90 freshmen that I’m working with for the three classes of Spanish One that I have. It’s probably the best freshman class I’ve encountered. Once I got used to being back into that, I realized that this is going to be really enjoyable, so I feel like it’s going to be a really nice ride.”

Jordon - “Who are your biggest inspirations when it comes to music?”

Mr. A - “I’m a bass player, and I learned how to play bass by listening to the Beatles and all that British Invasion stuff when I was growing up in the early 60’s, so it was learning different styles but being as fluent as possible. I would say Paul McCartney was instrumental in that. Then I started listening to a lot of guys that were playing blues, whether it was B.B. King or Stevie Ray Vaughan or something like that and listening to their bass players and how they fit. So yeah I’d say the blues guys and some of the early British Invasion type stuff.”

Jordon - “Who are your favorite musical artists today?”

Mr. A - “There’s a duo and they play with other guys and stuff, but they’re called “The Cactus Blossoms,” and they do kinda Americana music. They’re just so smooth and so chill, it’s just unbelievable how soothing it is to listen to their music. I mean it’s not like it’s elevator music or anything; it’s good stuff with good beats and stuff like that. It’s just that they're so good at it. It's just a pleasure watching them play. So that’s my new favorite band, but if it’s music I haven’t heard, and it could be 23 years old, it’s brand new, so every once in a while somebody will say ‘hey have you heard this?’ and I’ll pull some tracks down from the 70’s or 80’s, and it’s like ‘wow.’ You know, you discover this for the first time, and it’s really amazing. So it changes week to week; you start focusing on one particular band that you didn’t know about, and you try to learn as much as you can about their structure, and I listen to the bass player real close to see what he’s doing, but it’s all over the place.”

Jordon - “How would you summarize your time at Heritage?”

Mr. A - “You know, being just a normal person, some years are better than others, and it just kinda depends on the students and the curriculum you have, because I started off as an English and Spanish teacher so I had both types of classes. I’ve been primarily Spanish for half of [my time here]. It was really different in the early days, because you gotta focus your mind on doing stuff for English and literature and then turn around and do Spanish grammar, so sometimes it was hectic. Sometimes it was chaotic, but in general by the time the year started developing, each individual year, it would improve and make it more enjoyable.” 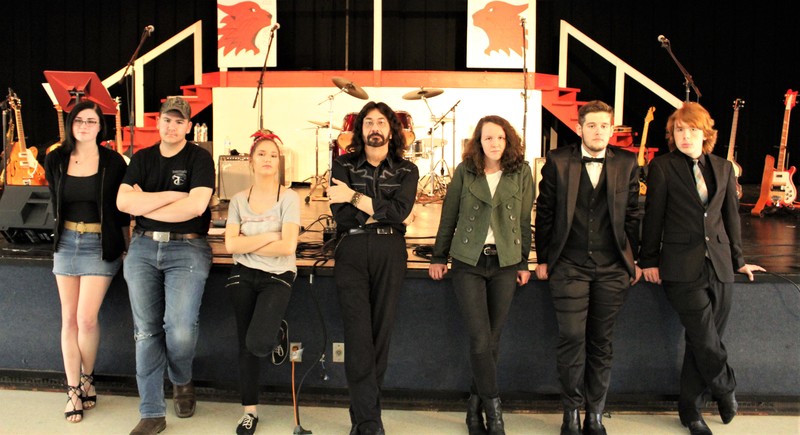 Alexander (middle) poses with the Music Club in the May of 2019, ahead of their "rock'n country" performances.

Jordon - “What is one ‘best moment’ that comes to mind when you think about your career?”

Mr. A - “We used to have a Music Club here, and in three different instances, we were able to assemble a group of people and get up on stage and present a program which we did in May. One year, we did music by the Beatles, and then a couple years ago, before the pandemic hit, we were able to do a show that was kind of like country rock, that kind of stuff. So being able to take students, some of whom had barely played, and by the time May rolled around, they were really good at what they were doing, and to be able to present that to parents and to other people, it was just such an incredible accomplishment to be able to see these guys pull together and get stuff done. So one of my best memories of course is in music, which isn’t a curriculum choice, but I just had a really good time back then. It was really enjoyable.”

Jordon - “What about retirement are you looking forward to the most?”

Mr. A - “Well right now actually, going into retirement means I will have less ‘work,’ but not in the way it normally means. Right now, I have school, and because of my interest in music and playing in my band, we’re so busy so many nights of the week, and there’s so much music to learn and work out and write and things like that, and we’re doing that as well right now. So once I’m retired, I can do that more full-time. It’s like retiring into music; it’s like the next stage of what I’m going to do. It’s not like I'm going to sit on the couch and watch re-runs all day, because we really like playing, and it’s really interesting to be able to do that at this point and time in my life.” 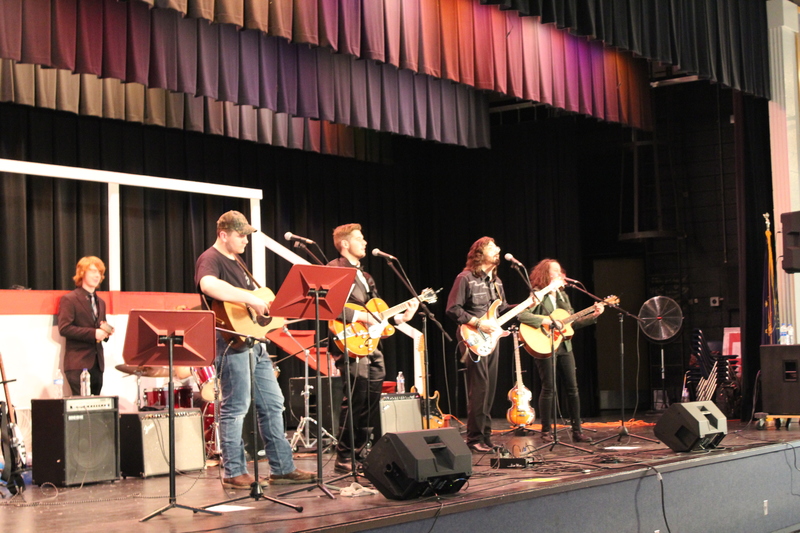 Having played in various bands and produced multiple musical albums in his past, Alexander led students in professional quality musical experiences. Here, the Music Club performed live on the Heritage cafetorium stage in 2019.